2019 survey: the voice of my social media marketing students 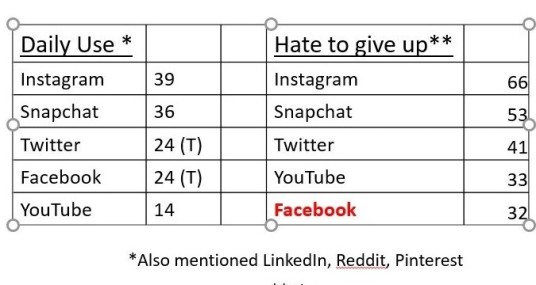 Instagram and Snapchat have been tops for a while; Snapchat may have lost some momentum based on the past two surveys. Probably the most interesting finding – and one that has been consistent through six years of surveys is that these college students don’t value the number 1 social media site, Facebook, as much as you might expect. Four social media sites rate ahead of Facebook as ones that would be most missed. Facebook is tied for third with Twitter for sites checked daily.

When I posted similar results 6 years ago I created a bit of a stir among the readership     – was the future of FB bleak? I suggested that the FB audience would not only age, but might become primarily Facebook For the Dead. I could see real value in a permanent digital site to host pictures, videos, and memories of those who had passed away.

A less fanciful observer, Mark Schaefer suggested that they were merely avoiding their parents and older siblings on Facebook and would join them on the site once THEY wanted to brag about their jobs, trips, pets, and children.

When I asked the classes this year “why not Facebook?” the number one response was that their parents AND grandparents were on it. The primary reasons for not being on Facebook cited most often were:

Checked in past two weeks 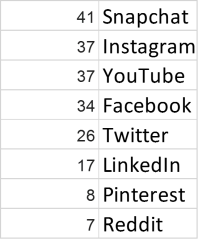 As you might guess Facebook fared much better on a survey question on sites visited in the last two weeks – you have to check in with Mom and Grandpa occasionally.

Facebook is still number 4 but is competitive – they have FB they just don’t use it or like it as well as the other sites.

Finally, the new students were asked to name their biggest concern about social media. I tried to bundle their concerns into clear categories. (I left off mutltiple single concerns for brevity.)

Number one in my categories was Content Shock. None of the students actually used that term but they were clearly concerned with the amount of information, communication, and entertainment being promoted on social media. Examples of their concerns included:

Ethics, privacy and the changing technology were major concerns. I thought was interesting was that several students suggested that awareness of hate speech and bullying was making participants more sensitive and more easily offended, further pushing us all apart.

Some had their marketing hats on and talked about the challenge and opportunity to target specific groups and micro-groups.

These were the high points of the survey to find use and attitudes before SMM class. I am sure to post more about these new bloggers, content marketers, and social media critics as the semester unfold.

What else should I have asked the group?

Most of these observations seem fairly consistent with the results of surveys six years later. Of course, Vine is gone… but it seems to have been replaced by TicTok (can the Twitter team do anything right?). Yik Yak seems to be a small niche, and the growth of Snapchat seems to have faltered.

I look forward to reporting back in six years…

1 Response to 2019 survey: the voice of my social media marketing students